After narrowly escaping the clutches of Das Uber-Zombies and awakening the sleeper within the basement of the ziggurat, the party now knows the only way out is up. The spectre of death looms over our adventurers this week as they continue their trek through the temple/tomb of El Jahad.

After previously blasting a hole in the ritual room filled with Uber-Zombies, the heroes began to notice a tell-tale horrible rumbling shaking the entire ziggurat and decided to move onward as quickly as possible. Thankfully, someone had previously torn a large hole through the external wall and they were able to get onto the roof of the first level in this ziggurat. While poking around outside, Gent again had the pleasure of seeing everybody's favorite pair of enormous orange eyes glowing in the darkness. While trying to urge everyone to go the other direction, the pale beast slipped off into the darkness and ascended to the upper levels of the structure.

Shank proved himself useful as he was able to provide a grappling hook and climbing ropes to help the group ascend the rain-soaked outer levels with relative ease - not before slipping off of the rope and falling down on his back. He brushed the water off and led the party upward with a determination not often witnessed by his comrades.

Upon ascending to the top of the tomb, Shank and Gent were able to make out the contents an open-sided structure on top of the flat roof. Bones, gore, and general disarray covered the floors everywhere with no sense of purpose or pattern - all surrounding a pedestal radiating a dim red light. Before their eyes, the spirit of El Jahad - fueled with necromantic energies put in place before his eventual death - coalesces in front of their eyes. He directed his gaze at Gent and demanded that someone wear the crown of flame and sacrifice the blood of one amongst the group, with the promise that the rest would go free. Gent turned to Garamond and suggested that his god may have something to say about that.

When the heroes rejected his offer, El Jahad tried to possess various members, moving from Garamond to Gnur, back to Garamond. Upon the initial possession of Garamond, Gnur thought he might be able to help by gut-punching Garamond. It did not. While El Jahad was not successful at overriding their will completely, he felt he was in a position to begin bargaining for his original desire. Gerda used her divine connection to Nantosvetla (and a sacrifice of part of her ear) to consecrate the pedestal with holy light, allowing Garamond to push the invader from his body, but El Jahad's gaze was now drawn to a new holy host and attempted to attack Gerda. Knowing Utar and Nantosvetla to be kindred deities, Garamond rushed to her aid - using her own holy symbol to rebuff El Jahad temporarily. Afterward, El Jahad again attempted to possess Garamond.

Gnur, whose only real desire in this life is to cause death and destruction, decided that this was all very boring so the situation needed more explosions. He lit and threw a grenade at the pedestal at the center of the room, only to see Garamond's body lurch over and seize the projectile mid-air. Using the momentary lull in El Jahad's concentration, Garamond was able to force the invader from his body by calling on the divine power of Utar. Garamond quickly realized he was holding a lit grenade and tossed it into the furthest corner of the room, causing an immense shower of bones and other unwanted sharp things flying at the assembled group.

In the ensuing chaos, El Jahad felt he could better tempt a follower of the arcane disciplines and attempted to assume control of Gent. Time slowed to a stand-still as a full-body apparition of El Jahad appeared before Gent's sight, offering him the same deal that had been offered to the heroes previously. Underestimating the well-learned wizard, El Jahad was forcibly ejected back to reality with enough force to send his form flying across the roof and off the other side.

Garamond used the momentary lull to check out the pedestal, using his holy healing to dispel the necromantic spells feeding off of this font of boiling blood. Attempts to retrieve the crown from the bottom of this divet of disgustingness did not succeed, and the assembled heroes all heard the ensuing roar of something massive very close to their current location. Suddenly, they were confronted by their previously encountered pale friend, now under possession by El Jahad. 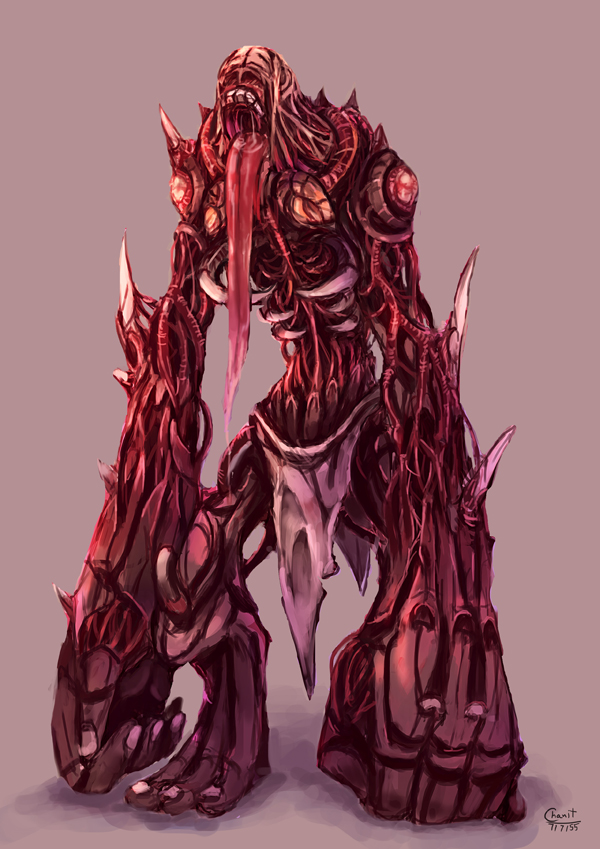 Shank is caught entirely unawares and finds himself held aloft in the golem's grip. Having given the group plenty of chances to accept his bargain, El Jahad makes an example of shank and crushes him. While he thrilled at the feeling of taking a life, Shank made a deal with death in order to keep his soul on the mortal plane a while longer. El Jahad tosses Shank's limp form aside and it tumbled off of the rooftop level of the ziggurat. Gerda rushed to see if there was anything she could do to help the crumpled form, however she was pinned by the monstrosity's grotesque hands. Gent attempts to free Gerda by firing arcane missiles directly into the beast's eyes.

The party scuffled with the possessed beast, attempting to wound it but found that it was impervious to non-magical damage. Garamond used a spare moment to enhance his blade with divine magic, sending El Jahad into a rage. He leaped onto the roof of the gazebo and attempted to crush Gerda with his corpse-fingers; only to feel the divine might of Garamond's sword separating his hand from his arm.

Gnur felt that he could retrieve the precious treasure from the pedestal of boiling blood, and used his last remaining grenade to blast the side of the font and floor to bits, draining the blood, and flinging the crown of flame over onto the floor. Zodias' focus on the crown is only broken by the appearance of the alchemist from the encampment of the Empire of the Gilded Wing and the goblin advisor from the orcish village. Zodias quickly forms the nascent flames brought into existence by the crown into a fire barrier preventing the interlopers from accessing the crown, snatching it for himself. He places the crown on his head, and feels power coursing through his veins.

As Dorrance and Garamond attempted to fight off the abomination, neither having a particular amount of success, Zodias commanded El Jahad to cease his aggression and parlay once again. Seeing the crown atop the immolator's head, El Jahad figured a bit of bargaining might be in order and commanded his pet to retreat momentarily. Zodias' assertion that they be allowed to leave freely was not entertained, as Garamond used his divine blade to slash through the ghostly form of the Cimmerian necromancer.

Garamond's strike through the ghostly form of El Jahad did a little to disrupt his necromantic energies, however it did piss him off. He retreated to possess his corpse golem again, and Zodias just sighed that he was again unable to parlay with a fellow person of evil repute. Gent noticed that the build-up of magical energy inside of Zodias was becoming quite perilous, and encouraged the salamander to utilize his new reserve of power.

Zodias unleashed a torrent of fire unlike anything the adventurers had ever seen directly at El Jahad's golem body. Dorrance had been attempting to climb the monster and punch it in the face, but sadly did not have time to react to the incoming torrent of flame. Even as the flames slashed through El Jahad and hungrily consumed the corpse flesh, they singed half of Dorrance's face beyond recognition. El Jahad's attempts to retain corporeal form were cut short as Garamond strode over to him and stabbed his divine imbued sword through his ghostly form - banishing him forever from this world.

When Zodias released his unearthly power, he in fact opened a 1-way gate between the material realm and the plane of fire, sucking the adventurers into a nicely developed plaza in the dwarven city of Red Rock. Amidst the stares from the townfolk who had never seen such a thing, the group was greeted by a friendly innkeeper named Rolph, who set them up with rooms and helped them find their way to the temple of Nantosvetla.

At the temple, Dorrance devoted himself to the defense of the city, should it ever need it, in exchange for magical healing. His wounds repaired, and his face bearing brand new scars, he emerged from the magical waters feeling a spark of light in his soul that had previously been non-existent.

Outside, Gent revealed to Garamond that the mysterious potion previously stolen off of the orcs by Shank was no ordinary potion, but one bearing the seal of his master. Especially odd was that it wasn't just a standard healing potion...

Now stranded in a friendly settlement on the elemental plane of fire, the group must find not only a way to get back to their own plane, but also some mechanism to keep the ego of their immolator in check.

Having escaped a brutal fight with El Jahad, one member lighter for the efforts, our adventurers find themselves pulled…

Our plucky heroes awaken from a fitful rest inside of the magically sealed of EVIl TEMPLE of EVILNESS. But…